FOUNTAIN OF THE VIRGIN 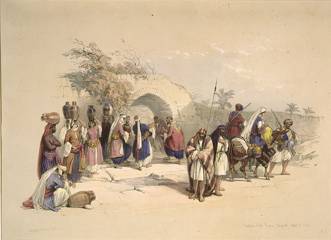 And the angel of the Lord found her by a fountain of water in the wilderness,
by the fountain in the way to Shur.
Genesis 16:7 (King James Version)

Walking in the footsteps of eminent nineteenth-century Western painters and sketch-artists, such as Dominique Vivant Denon, Charles Barry and William Henry Bartlett, Scottish artist David Roberts made an extensive tour of the Middle East in the late 1830s. After having spent several months in Egypt, he crossed the Sinai Peninsula and explored Palestine, Syria and Lebanon. Generally regarded as « the first painter to show Palestine landscapes as it actually was » (Shepherd : p. 100), Roberts produced a considerable amount of drawings, which he later published in his six-volume Views in the Holy Land, Syria, Idumea, Arabia, Egypt and Nubia (Simoën : p. 192). During his journey through Galilee, Roberts visited the source of Mary’s Well in Nazareth where, according to local traditions, the Angel Gabriel announced to Mary that she would give birth to the Son of God.[1] His painting « Fountain of the Virgin » features an ancient fountain with a stone-built reservoir, surrounded by an arcade, whose roof is partially concealed by vegetation. A few palm trees can be seen in the far distance. In the centre of the painting, several men and women bend over the fountain to fill their empty jars with fresh water. The men are coiffed with the traditional red fez. In the background to the left, a group of women carry pitchers full of water on their head. Nearly all of them wear long colourful tunics with narrow stripes over loose dresses or broad trousers; some bind a shawl around their forehead and neck, others wear the red fez wrapped in a white turban; they are not veiled from casual eyes. One of the women, quite apart from her fellow companions, sits in a crossed-legged position, her face imperceptible in the shade of the turban; her empty pitcher rests on the old pavement surface. By her side, stands a black woman, most likely a slave, with an empty jar on her head. She is half naked from waist up, though her breasts are hidden by her folded arms. In the foreground to the right, we see two Bedouin men dressed in white robes and striped cloaks. One of them holds a long spear, whereas the other, placing his left hand on his chest in a rather sensual, almost feminine manner, carries at his side what appears to be a shabaria (a traditional Bedouin knife). While both men avoid looking at the women directly, they seem to keep watch over them out of the corner of their eye. Behind the Bedouins, two riders, probably husband and wife, are moving away from the underground spring. An armed attendant leads the woman’s mount.

It is interesting to note that David Roberts managed to capture in his painting a scene not often witnessed in the Orient of that period, that is, the social interaction between men and women. Indeed, in the Ottoman Empire, the free intermingling of the two sexes was heavily restricted and could hardly ever occur outside wedlock. Nevertheless, in some remote areas or small provincial towns like Nazareth, such segregation was not fully observed. Fountains, cisterns and gardens were viewed as « informal environments » where young men and maidens were able to meet and discuss.[2] As Louis Lortet, who visited the Middle East in 1875 and 1880, points out in La Syrie d’aujourd’hui : « It is around this fountain (Mary’s Well) that the young men of the city enter into a courtship with their wives-to-be. Nazareth is the only place in Syria where mixing of the sexes is tolerated in a public place »[3] (Lortet : p. 183).

More importantly, one could further claim that David Roberts’ painting lies at the centre of the heated debate about the representation of Palestine by Europe and the United States around the end of the age of Romanticism. In fact, although a large number of nineteenth-century Western travellers, like their medieval predecessors, continued to visit the Holy Land out of strong religious motivations, even the most devout Christians were often scandalised by the superstition and fraud surrounding the sacred sites. Many came to view Jerusalem, with its numerous shrines, endless ceremonial processions and strong religious antagonism, as a vast mausoleum of idolatry, and did not hesitate to give voice to their outrage at the insidious devices used by the monks of Palestine to attract more pilgrims and funds. For example, when briefly listing the various sanctuaries housed in the Church of the Holy Sepulchre in Jerusalem, Mark Twain writes that « there is nothing genuine about them, and that they are imaginary holy places created by the monks » (Twain : p. 385). Similarly, in a letter addressed on 20 August 1850 to his friend, Louis Bouilhet, Gustave Flaubert says : « Much has been done to render the sacred sites ridiculous. It is whore in devil : hypocrisy, cupidity, falsification and imprudence, yes: but of holiness, there is not trace »[4] (Flaubert : vol ii, p. 230). In a way, what Twain, Flaubert and other nineteenth-century travellers sought to denounce was the irrepressible urge to match all biblical stories and characters with a variety of tangible places. One such location would be the famous Via Dolorosa, also known as the Way of the Cross, which is reputed to be the path where Jesus walked while carrying the cross on his way to Golgotha. The « materialization » of Christ’s suffering in the form of stones, fragments of pillars and stairs along the Via Dolorosa could only serve to rile those already annoyed with the liberties taken by some of the religious authorities in Palestine. For instance, this is how Gabriel Charmes sums up his visit to the Way of the Cross : « The absolute lack of information, which was the essence of the charm of the Gospels, is suddenly followed by an abundance (of information), and by a high precision of technical and topographical details, that one becomes disgusted (by it all) »[5] (Charmes : pp. 41-42).

In order to escape the oppressiveness of Jerusalem, many Western travellers sought refuge in the hills of Galilee and the green fields of Samaria. It was in a countryside interwoven with small villages and very few agricultural lands that some of them managed to find what they were looking for : echoes of biblical authenticity. Catherine-Valérie Boissier de Gasparin, who journeyed around the Levant in 1848, says in a few words what others can hardly express in an entire volume : « […] we do not need to find one particular path or site: all the paths, the sites, the mountains and the valleys, the torrents and the fountains, they all say to us: Jesus loved you, Jesus saved you »[6] (Gasparin : vol iii, p. 233). In particular, Gasparin clearly rejects the austere cult of stones and sanctuaries practiced by the Christian clergy in Palestine. Ordinary scenes of rural life, she asserts in Journal d’un voyage au Levant, such as Arab fellahs casually moving their cattle to graze on the land and large caravans of merchants emerging from the deserts of Arabia, may bring back memories of childhood innocence and biblical stories in a more efficient way than the mere act of praying at shrines made by human hands (Gasparin : vol iii, pp. 232-233).

Also evident in this quest of « holy images » is the romantic idealisation by Western travellers of fountains and pools. Water has always been of vital importance in the Middle East, whether it is for basic domestic needs or for the purification of the soul. « It is necessary to have journeyed across the gloomy Judea », says Jean-Joseph-François Poujoulat, « and under a blazing sun to appreciate the sheer happiness that one feels along the shores of a clear stream running amidst cool shades »[7] (Michaud and Poujoulat : vol iv, p. 374). Accordingly, where there is water beneath the burning Levantine sun there is life, and where there is a cistern there is always a settlement, or at least the dusty ruins of previous ones. In other words, while cities have been destroyed and rebuilt several times over the centuries, water sources are believed, quite mistakenly perhaps, to be eternal.

Therefore, it should not come as a surprise that nineteenth-century Western travellers came to regard fountains as the passive witnesses of ancient Israel’s rise and downfall; after all, travellers argued, why would it be so unreasonable to believe that Abraham and his Hebrew descendants dwelling in the land of Canaan, the Holy Family on its flight into Egypt, and Jesus and his apostles wandering in Galilee might have drunk from the same cisterns as those still in use in the nineteenth century? Being the only source of water in Nazareth, Mary’s Well was certainly considered by Western travellers to be one of those privileged, silent observers of days gone-by. « Hither, it is said », Austrian Ida Pfeiffer explains in her account, « the Virgin came every day to draw water, and here the women and girls of Nazareth may still be daily seen walking to and from with pitchers on their shoulders » (Pfeiffer, A Visit to the Holy Land, Egypt and Italy). Along the same line, Eugène-Melchior de Vogüé writes about Mary’s Well in his Voyage aux pays du passé or « A Voyage to the Countries of the Past » :

Read the Bible through and through: all the primitive establishments, all the patriarchal scenes revolve around a cistern or a fountain, whose history one can sometimes follow over the course of the centuries, that goes on serving as the meeting place within the Arab village, the only element capable of forging a strong bond between what would otherwise be transitory agglomerations: the least drop of water is a precious inheritance transmitted by successive races and generations, and, at the same time, the only depository of their fundamental archives.[8] (Vogüé: p. 121)

Thus, it seems from the above passages that fountains, such as Mary’s Well, were not only viewed as the authentic remnants of biblical times, but also as the bearers of ever-enduring traditions in an allegedly pure and « unchanging Orient » (Said : p. 96). In other words, one thing that David Roberts, Ida Pfeiffer, Eugène-Melchior de Vogüé and other nineteenth-century explorers had in common was a frantic longing for primitivism in the face of a « ruthless » century of unparalleled materialism and scientific advances. Their journey into the Palestine countryside was not just about moving in space from one area to another; as author John Mcleod indicates in Beginning Postcolonialism, « they were also travelling back in time to an earlier world » (Mcleod : p. 44), to a supposedly immutable society of archaic and long forgotten ways of life. If we accept this premise, « Fountain of the Virgin » by Roberts is no less than Western travellers’ attempt to withdraw momentarily from the so-called « white modernity » (Thomas : p. 179) and to catch a glimpse of how daily life in biblical times might have been through a direct encounter with contemporary Palestine.